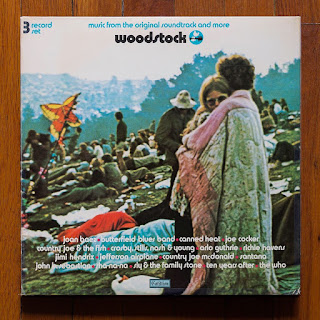 I’ve been thinking a lot these days about what the 1969 Woodstock Festival means, and specifically how it affected me. Since it undeniably did, -not only from a musical perspective, but from a very visual one, writing this post was important to me.


In context, I was born 6 years after Woodstock, in 1974, very far away from White Lake, Bethel - NY, where the festival was originally held.

I've lived in New York for a long time now, but so far haven't visited the site of the original festival: Max Yasgur's farm. Located in a treasured part of New York State, up in the Catskills, the place is mythical. There are a few reasons for not having been there yet (-basically work in NYC keeps me busy!-), but the main one being that I believe the people who were really there 50 years ago are the only ones who can have a real grasp of what the event did for them and their generation. The location and its significance can only be truly described first-hand by them, the attendees. Only they can really know how everything has changed in these 50 long years -though some may not remember at this point.

But, for those of us who were magnetically drawn to the experience of the festival, especially through the film and the original soundtrack, Woodstock is also is a huge deal. It wasn't only "3 Days of Peace and Music". The legacy has been with us a full fifty years in time, since August 1969. 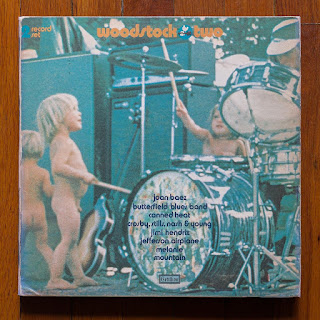 I discovered Woodstock and its older sibling -1967’s Monterey Pop-, when I was about 12 or 13, through an uncle who was a great music lover. Monterey Pop had an amazing lineup, and the film was masterfully directed by D.A. Pennebaker who we just lost a few weeks ago (R.I.P.). It really is an absolutely stunning visual and sonic piece of work, and The Criterion Collection did a gorgeous job on the remastering of the Blu Ray. Monterey Pop is one of the greatest films in my collection and is up there among my top-five favorite films of all time. 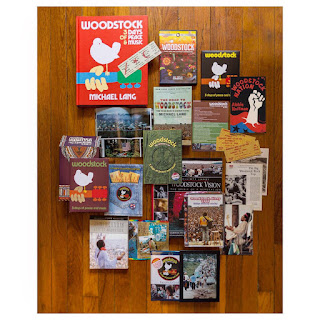 But Woodstock, the film, the documentary, is also up there. Directed by Michael Wadleigh. Edited by Wadleigh, Stan Warnow, Martin Scorsese, Yeu-Bun Yee, Jere Huggins, and Thelma Schoonmaker. All the editors deserve full-credit as this was a massive undertaking that masterfully compressed over 78-hours of filming into a 224-minute feature (on the director's cut version) -yet most people only cite Scorsese as the principal editor.

Woodstock became the staple for every important festival that would follow. Glastonbury, the Isle of Wight, Live Aid, Lollapalooza, Roskilde, Coachella, Bonnaroo and all the others that are held today owe basically -everything- to Woodstock. And you can really SEE that when you see a full-screening of the film.

On those 3 days (actually, 4 -when counting Jimi Hendrix's performance on the morning of the last day, - / a Monday that implied that thousands of people had already left the originally 400K+ crowd because they had to go back to work), the appeal of the massive gathering that coexisted without peril, and under the psychotic weather, was enhanced by the thrill of witnessing such a lineup of artists perform on circumstances quite different from the ones we have today.

At some point after Joe Cocker's Sunday's performance, it all seemed to be approaching the verge of catastrophe, with the threat of collapsing/scaffolding audio towers and the risk of general electrocution, which funnily enough is always a thrill to watch.

The opening to the experience of Woodstock is really all encompassed in the film and in the original soundtrack. But mostly in the film. Every filmmaker or cinephile should watch Wadleigh's  Woodstock, and every musician should listen to at least 5 performances of the many ones recorded in the festival. Oh, and I know people who are filmmakers and consider themselves very cultured but have never watched a minute of Woodstock. They don't know what they are missing on every possible level. 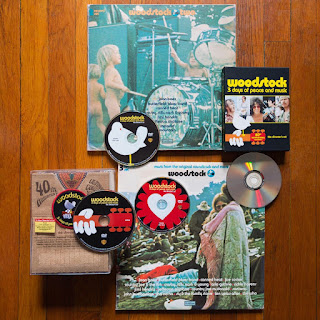 So, now you can see how since I was a teenager I have been collecting almost everything that has been released about Woodstock and Monterey.

These are just some of my Woodstock artifacts. Vinyl records, cd’s, magazines, newspaper articles, dvd’s, blu rays and books. No matter how much I look at the pictures and hear the sounds of the 1969 festival, I always find something new and exciting about the unfolding of the event and the energy it transmits.

Another look at the quintessential artifacts: The soundtrack and the film. The original vinyl records and the 40th and 45th Anniversary editions of the films in DVD and Blu Ray discs. Packed with extras, they have a ton of previously unseen material. A real joy to watch and listen to in Hi-Fi. © Cotillion/Atlantic Records - Warner Bros. Pictures.

In a time when everyone seems to be bashing Michael Lang and company for not being able to make deals and secure permits to make a 50-year celebration happen, I think it’s totally fine (and probably better) that it didn’t happen this time. Nothing beats true originals. The music of today and the industry that merchandises it has very little to do with what was happening in the late ’60s. These are different times, and not necessarily thankfully.

* A very short text-less post about the festival (but with more pictures) was posted on my Instagram account on the exact date of the 50th anniversary of the launch of the festival, here.

I'm sure I'll visit the location of the 1969 festival sometime soon; the bowl that held all those thousands of people. Woodstock turned it into a place of legendary status after being just a dairy farm. The farm owned by Max Yasgur, who believed in Lang, Roberts, Rossman, and Kornfeld, masterminds behind the festival's conception... Aren't we all supposed to go back to the garden anyway?
Posted by mgpixlab